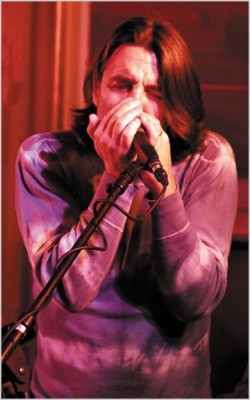 Mike Verge is a singer / songwriter, whose music has been compared to Tom Petty, Train, the Black Crowes and the Jayhawks. This Berklee College of Music graduate and Boston native has performed shows from Boston to Los Angeles; Portland, Maine to the Caribbean and coffee shops to arenas.

Mike was approached by legendary producer Jack Douglas (John Lennon and Aerosmith) to write a song for the independent film, “This Thing of Ours” starring Frank Vincent, James Caan and Vincent Pastore  (www.thisthingofoursthemovie.com).

Mike wrote and recorded “Connected” which appears in multiple scenes of the film. Director Danny Provenzano asked Mike to recut The Doors classic, “LA Woman,” for the film. Mike enlisted the help of Aerosmith guitarist, Brad Whitford, and recorded the track that also appears on the film’s soundtrack. This past year the film was screened in theaters nationally and is available on DVD and soundtrack release.

Mike also penned the song “SWAG” for the short film “Swagland,” which was screened at the Tribeca and San Francisco film festivals.  The film, produced by Mike Coleman of Coleman Films and Myra Sheer, also appeared on Current TV which is a new independent cable and satellite TV network, available in 20 million homes around the United States. www.colemanfilm.com/swag/

Additionally, Mike enjoyed great success with his former band, Virgil Cain, as frontman and songwriter.   His band was handpicked by Hootie & the Blowfish front man, Darius Rucker, to open for the Blowfish’s sold-out New England appearances.  The group was selected from thousands of bands to perform at the NEMO Showcase.  Additionally, Virgil Cain was the featured live performer at the Fleet Center’s televised New England Sport Awards.

Mike’s songwriting style has also attracted the attention of The Band drummer Levon Helm, who offered him a slot on the Boston leg of his tour. Verge has opened for several other big-name acts, including Dave Davies (The Kinks), Buck Cherry and Cheap Trick.

Mike also wrote and recorded the Ballpark Anthem, “Let’s Go Red Sox” which is an in- between inning staple on the PA at Boston’s legendary Fenway Park, home of the Red Sox.

Mike signed a global distribution and licensing agreement with Innsbruck Records to promote his latest album, “Love is a Tattoo” officially released on April 6, 2012.