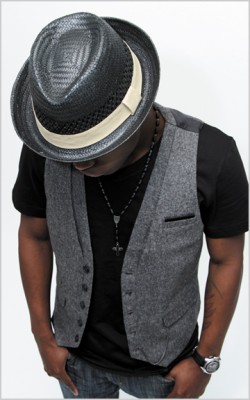 Born Ederson Beauvois in Port-au-Prince, Haiti, Ederson spent his younger years surrounded by the large and creative Beauvois clan. Early musical influences ranged from classic French soul music, beloved by his mother, to the modern rhythms of traditional Haitian music he heard from his brother Jon, a professional pianist.  When Ederson was 10, his parents moved the family to the US, where he spent some years in Florida. Ederson later moved to Massachusetts where he attended high school in the city of Somerville and still resides nearby.

Living in the US, Ederson was exposed to R&B legends Luther Vandross, Marvin Gaye, Al Green, Curtis Mayfield and Baby Face among other R&B greats.  Ederson spent much of his high school years working alone, writing and singing. He was later discovered by his brother Marc Beauvois, also a songwriter, who immediately recognized Ederson’s natural talent and star power. Managing his career was the next logical step and they began working to develop Ederson’s youthful voice into the sophisticated and consistently wide vocal range he now controls.

Their first collaborative CD was “Out of the Darkness” in 2005 with Ederson producing all nine tracks as well as co-writing three of the songs. Most recently, he co-wrote “Definition of love,” “Secrets” & ”Let me ride” – his newest singles.  All three songs were part of a new album released in 2012. Ederson’s unique sounds have been variously described as Jazz, Soul, or modern R&B, but none of these fully captures his elusive and captivating music.

Ederson’s diverse background and influences can most clearly be heard in his sophisticated approach to producing beats and melodies. His smooth combinations of pulse-racing bass and sultry vocals evoke hot nights and steamy encounters.

In 2012, Ederson signed a Development/Management deal with Innsbruck Records.  Shortly thereafter, Ederson recorded two new singles, “Shiver” and “Out In The Rain” produced by RK\Roman Klun and written by hit songwriters Matthew Gerrard, Steven Lee Olsen (Shiver) and Fillip Melchior, Fridolin Nordsoe, Mich Hansen, David Kopatz, Anthony McLean and Carl Utbult (Out In The Rain).  In that same year, Ederson was voted “Boston’s Best Urban Artist of the Year” and was also a finalist at “Stars Over Boston” hosted by Magic 106.7 FM with Candy O’Terry.  In addition to performing at many showcases in New York, Ederson continues to participate in charitable events such as the highly recognized Glovebox Charity held in Boston hosted by “Boston Women in Media And Entertainment.”