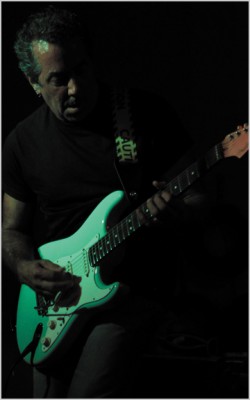 Joe Caro is a guitarist, composer and singer born and raised in New York City well known for his work in the New York underground scene fronting an all-star band that included Trumpeter Chris Botti, Saxman Lenny Pickett and Late show Drummer Anton Fig performing every Tuesday night at the NYC club, The Metropolitan Café. What started out as a 2 week gig continued for 8 years and became the home base for many New York City session musicians. Early influences include the British Invasion and Jimi Hendrix and Cream.  A stint discovering the blues came next, listening to all the greats from Robert Johnson to Howlin’ Wolf and Elmore James.  Soon after playing in local “garage” bands, he became interested in jazz focusing on Mile Davis, John Coltrane and all the great jazz guitarists.
With those varied influences, at age 18, he moved to Manhattan and started working in the New York recording studios and touring with Jazz and Rock/Pop artists in the US, Japan and Europe.  He has recorded with many diverse artists such as Bette Midler, Blue Öyster Cult, Carly Simon, Dr. John, Michael Franks, Bobby McFerrin, Gato Barbieri, Michael McDonald, Fania Allstars, Chaka Khan, Irene Cara, Candido, Randy Brecker, Elements and many more.

Additionally, Joe has appeared with various artists and in the house bands on TV shows such as “The Late Show with David Letterman,” “Saturday Night Live” and “The Grammy Awards” and participated in countless recording sessions for TV commercials and movies.

In the 90’s Joe formed “BFD” with Drummer Steve Ferrone and Bassist Will Lee doing the NYC Club circuit with live shows that featured guest artists including Donald Fagen, Michael McDonald, Pat Metheny, The Brecker Brothers and Felix Cavaieri of the Young Rascals. This association produced the CD “BFD” (released on Iguana Records in the US and Pony Canyon in Japan) which featured several guests artists and ten of his original compositions along with production credit.  Then a brief Hendrix collaboration with ‘Acid Reign‘ featured the dynamic vocals of Sophia Ramos.

Impressive indeed, but even Joe’s packed résumé can’t prepare the listener for the originality and sheer exuberance that permeates the 2017 release Every Dog Has His Day. The follow up release to Joe Caro & The Met Band’s 2013 Live in New York City and Caro’s 2011 solo effort Home Alone, utilizes several of the most renowned players on the NYC scene—including drummer Anton Fig and Letterman bandleader Paul Shaffer contributing organ—on eight original tunes plus the aforementioned crisp new arrangements of Dylan’s “Highway 61 Revisited,” Hendrix’s “Fire,” Gerry Goffin and Carole King’s “Natural Woman” and the Harold Arlen/Johnny Mercer nugget “That Old Black Magic.”

Reviewing the Met Band’s previous release, Blues Blast magazine wrote, “It is undeniable that Live in New York City is an excellent album and it captures the energy and refined talent that Joe Caro and The Met Band brings to the stage.” That’s all very true, but they were only getting started.  Every Dog Has His Day truly takes this breathtaking collective to the next level.

Joe Caro and the Met Band, “Every Dog Has His Day” – Swaggering, soulful rock from a group of NYC vets, including Paul Shaffer, Bones Malone, Chris Parker and Anton Fig, with the leader’s guitar and vocals out front.