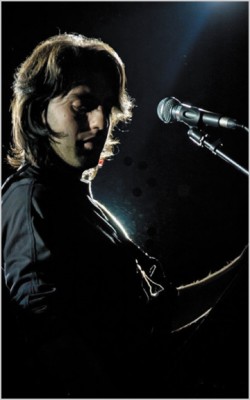 Marco Machera is an Italian musician/songwriter – one of the best-kept secrets of the music business.  He likes to say,  “I don’t play music – I make it happen.”  Basically self-taught, Marco has played nearly all kinds of music, from pop to rock, blues to jazz and fusion, to ambient and electronica, folk and gospel and everything in between.

Mainly known as an accomplished bass player, he is also a singer, guitarist and drummer.  Marco recently completed a European tour with the acclaimed band, Marillion (awarded #1 album of the year by Prog Rock Readers Poll).  He has also opened shows for guitarist Adrian Belew, drummer/producer extraordinaire Jerry Marotta, fusion virtuoso Frank Gambale and guitar heroineJennifer Batten.  Additionally, Marco played bass for Paul Gilbert, one of the world’s premier guitarists during some of his clinic tour dates in 2009 and 2011.  In December 2012, Marco joined David Lynch produced Texan chanteuse and femme fatale, Chrysta Bell, for the Italian leg of her European “This Train” tour.

While Marco scored the soundtracks for two theatre performances scripted by actress/director Martina Sacchetti and performed at the WCA Theatre of the University of the Arts of London, he also started working on what would become his debut solo-album – One Time, Somewhere.  “I write the music I would like to hear,” Marco says “…and I try to bring to life what I hear in my head.  While the concept of ‘unconventional music’ is pretty much relative, these songs are my humble try in terms of giving new life to the overused pop song formula.  Like a photographer who captures a moment in time, I wanted to convey images, memories and feelings into music.  I did not focus on musicianship, but on a sense of aesthetic.  The aim was to create a unique blending of sounds, which had to work as a whole.”

Marco Machera’s sophomore album, “Dime Novels” was officially released on January 28, 2014 via global distribution through Innsbruck Records.  This album features Pat Mastelottoon drums, Tony Levin on upright bass on “Out of the Blue” andMarkus Reuter on the U8 Touch Guitar (one of Reuter’s own designs) on two tracks.  Reuter also co-wrote one of the songs with Machera, “John Porno.”  The album was produced by Machera and long-time collaborator, Francesco Zampi (who also contributed sonic treatments to the album).  Jennifer Maidman (from the Penguin Café Orchestra) added some cuatro on “Ham On Rye.” Andrea Faccioli, a creative guitarist from Italy, plays different instruments on three songs.  Kevin Andrews and Pete Donovan(both from the US) are featured on “The Sky.”

When asked about the title of the album, Machera said “Dime Novels is a beast. Pretty much like my first album, One Time, Somewhere.  But I’m going further with this one.  I’m still exploring the possibilities that a pop song can offer:  I just love the idea of deconstructing the pop song formula and toying around with its elements.  I think “Dime Novels” sounds like an adventurous pop record.  It’s quirky, imaginative, cinematic at times.  Each song has a distinctive feel.  As Adrian Belew says: “Too much of today’s music is fashionable crap dressed as artistry.”  Machera specifically wanted to go the opposite way.

Machera’s first album, ‘One Time, Somewhere‘ was very well received, so it made sense to make a second one. When asked about the meaning behind the lyrics, Machera stated “…as usual, I talk a lot about myself throughout the songs, but there are cultural references and bizzarre elements here and there.  Lyrics could inspire the music and viceversa.  For instance, “John Porno” originated from a funny story I was told by Markus Reuter, so I worked on the words first.  Working on “Out of the Blue” was like writing the soundtrack for an imaginary noir film.  ”The Ugly Song” is a provocative track about (not) getting radio airplay. But I’ll stop here – I don’t like to talk too much about my lyrics. I prefer the listener to discover them when listening to the album.”