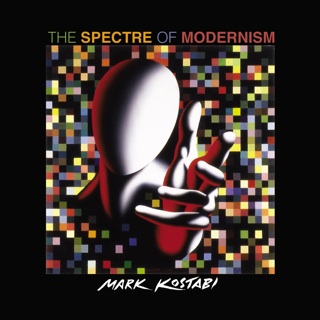 Mark Kostabi, also known for his many collaborations, quickly became an immense fan of Ornette Coleman, overwhelmingly inspired by his compositions and musical insight as an innovator.  “Mr. Coleman widened the options in jazz, and helped change its course.”  Mark Kostabi often invited Mr. Coleman as a judge and musical guest on his game show known as “The Kostabi Show.”

Artist and Composer Mark Kostabi was born in Los Angeles in 1960 to Estonian immigrants. Raised in Whittier, California, he studied drawing and painting at California State University, Fullerton. Kostabi moved to New York in 1982, and by 1984, emerged as a leading figure in the now legendary East Village art scene where he cultivated a provocative media persona by publishing self-interviews reflecting on the commodification of contemporary art. By 1987, his work was widely exhibited in New York galleries as well as prominently throughout the United States, Japan, Germany and Australia.

He inspired extensive international press coverage in 1988 when he founded Kostabi World – his bustling Manhattan art and now also television studio, which employs a panoply of talented painting assistants and idea people. Beginning in the early 1990s Kostabi’s work has been widely exhibited throughout Italy. Kostabi established a second home in Rome in 1996. Dividing his time between Rome and New York enabled him to dramatically enhance his presence in the Italian art scene.

He writes an advice column for artists, Ask Mark Kostabi, for Artnet.com.

Kostabi has designed album covers for Guns ‘N’ Roses (Use Your Illusion), The Ramones (Adios Amigos), Jimmy Scott (Holding Back The Years), RK: Roman Klun (Kingsway) and Seether (Holding on to Strings Better Left to Fray).

Kostabi is also known for his many collaborations with other artists including Enzo Cucchi, Arman, Howard Finster, Tadanori Yokoo, Enrico Baj and Paul Kostabi.

Retrospective exhibitions of Kostabi’s paintings have been held at the Mitsukoshi Museum in Tokyo (1992) and the Art Museum of Estonia in Tallinn (1998). The famous Italian art historian and curator, Vittorio Sgarbi, curated a vast exhibition of 150 Kostabi paintings at the Chiostro del Bramante in Rome in 2006. Kostabi’s work is in over 50 permanent museum collections, including the Museum of Modern Art, the Metropolitan Museum of Art, the Guggenheim Museum, the Brooklyn Museum, the National Gallery in Washington D.C., the Corcoran Gallery of Art, the Museum of Contemporary Art, Los Angeles, the National Gallery of Modern Art in Rome and the Groninger Museum in Holland.

His permanent public works include a mural in Palazzo dei Priori in Arezzo, Italy, a large bronze sculpture in the central square of San Benedetto del Tronto, Italy, and a bronze portrait of Pope John Paul II in Velletri, Italy.

Kostabi is the subject of numerous documentary films, most notably Bottom Line: The Kostabi Phenomenom directed by Peter Bach,Con Artist directed by Michael Sladek and Jedermann directed by Paul Tschinkel. Kostabi has a prominent role in the Emmy award winning documentary: The Art of Failure: Chuck Connelly Not for Sale directed by Jeff Stimmel.  See www.ConArtistTheMovie.com

The many books published about Kostabi include Sadness Because the Video Rental Store Was Closed, Kostabi: The Early Years, Conversations with Kostabi, The Rhythm of Inspiration, Mark Kostabi and the East Village Scene 1983-1987 and Mark Kostabi in the 21st Century.