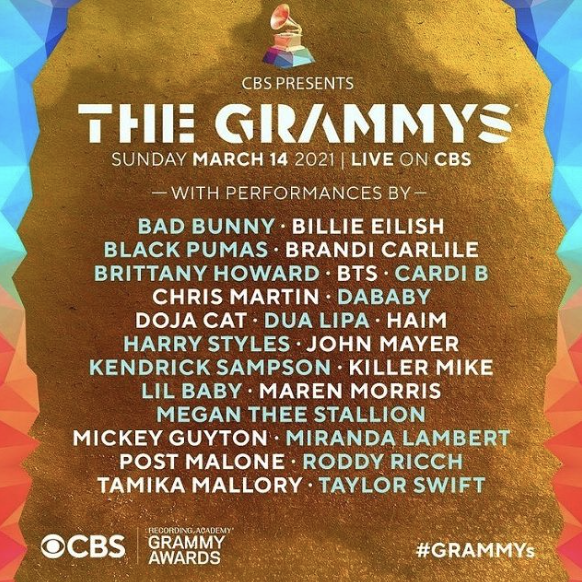 The Recording Academy has announced the events lineup for GRAMMY Week 2021 ahead of the 63rd GRAMMY Awards broadcasting Sunday, March 14, on CBS at 8 p.m. ET / 5 p.m. PT. All events will be virtual this year to ensure the safety of our staff and guests and to make the events as accessible as possible to attendees.

See the full GRAMMY Week 2021 lineup of confirmed events and additional details here and below:

GRAMMY In The Schools Fest
This four-day virtual event, presented by MusicPower, will celebrate music and music education featuring performances by students and professionals along with engaging, educational panels by artists, educators and other music professionals and will conclude on March 11, 2021.

Free to the public for those who register in advance by clicking on this link(opens in a new tab).

Women In The Mix
This event will recognize the contributions of women in music and amplify female voices across the industry. Highlighting producers, engineers, artists and executives, this program champions women who set the tone for their own communities and work to close gender gaps on and off the stage.

The virtual event will take place publicly on GRAMMY.com.

The Inaugural Black Music Collective GRAMMY Week Celebration
The historic event, presented by Mastercard, will feature an array of esteemed Black music creators and professionals known for amplifying Black voices in music and beyond.

The virtual event can be viewed on GRAMMY.com.

GRAMMY U Masterclass With Tayla Parx
Join us for a masterclass with GRAMMY nominee, Tayla Parx, as she discusses the craft of songwriting and being a multi-faceted artist. A singer, songwriter, actress, and entrepreneur, Tayla has penned tracks for Ariana Grande, Janelle Monáe and Anderson.Paak, in addition to her successful solo career as an artist. This program is in collaboration with the Recording Academy’s Black Music Collective and Powered by Mastercard.

The virtual event can be viewed on the Recording Academy’s Facebook channel(opens in a new tab).

‹ Xavier Toscano ‘Made It Look Easy’ with California Vid Win